You are here: Home / Operative Dentistry / Differences between Maxillary and Mandibular Molars -Permanent

It is important to know the shape and location of the cusps, ridges and other aspects as it helps in Cavity preparation, Access Cavity Opening and also in Crown cutting for any Crown to be placed.

Maxillary Molars: Shape of the Crown is Square

Mandibular Molars: Shape of the Crown is Pentagon

Maxillary Molars: Have one buccal groove

Mandibular Molars: Have two buccal grooves on the first molar and a single buccal groove on the second and third molars 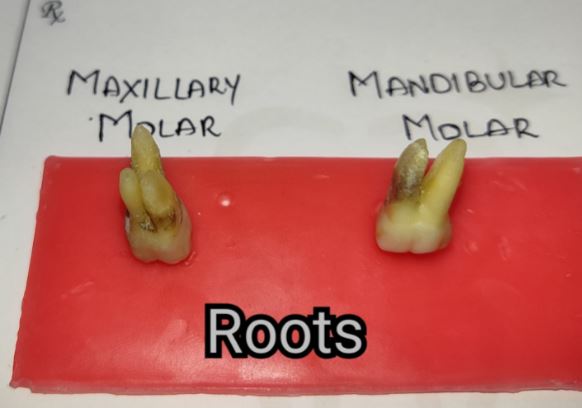 Maxillary Molars: Cusp of Carebelli is seen on the first molar

Mandibular Molar: No Cusp of Carebelli is seen

Maxillary Molars: The Crown tapers towards the Palatal aspect

Mandibular Molars: The Crown does not taper towards the Lingual aspect

Maxillary Molars: Oblique ridge is seen in both molars

Mandibular Molars: Oblique ridge is absent in both molars

Maxillary Molars: The Long Axis of Root and Crown portion are in sync with each other

Mandibular Molars: The Crown is tipped towards the lingual aspect when compared to the long axis of the Root

Maxillary Molars: Due to the number of cusps and their position, there in only one Transverse ridge 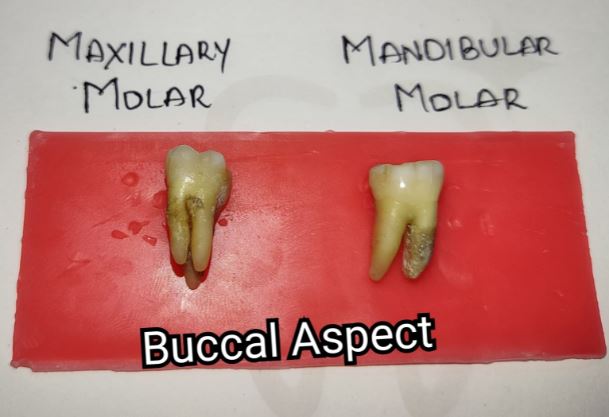 Maxillary Molars: The Shape of the Crown is Square when seeing from above

Mandibular Molars: The Crown is in the shape of Pentagon when seen from above

Maxillary Molars: Number of Fossae are four with large central one while the Distal one is a cigar shared one

Mandibular Molars: Number of fossae are three while the central one is the largest of the three

Maxillary Molars: These have four well formed cusps – 2 buccal and 2 lingual cusps along with Cusp of Carabelli (small supplemental cusp)

It is important for a Clinician to know the precise anatomy of the Molars of Maxillary and Mandible as it helps in many aspects of treatments such as – Cavity preparation, Access Openings, Crown cutting, etc. Knowing the correct anatomy of all the teeth help us in keeping in mind the location of canals to prevent loosing healthy dentin and preserving as much of natural tooth structure as possible. 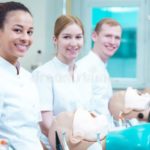 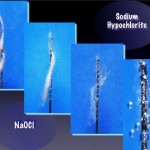 Sodium Hypochlorite is being used as the Irrigation of choice in Root Canal Treatment, it is being termed the most potent irrigation solution for Endotontic therapy by Endodotists. Irrigation material is a very important part of the procedure as it helps in killing and disinfecting the Root canal along with removing the debris from the […] 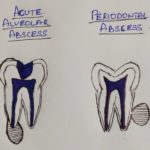 Acute apical abscess is also known as Acute alveolar abscess which is the localized collection of pus in the alveolar bone at the root apex of the affected tooth. It is caused when the infection extends through the apical foramen into the peri-radicular tissue. Periodontal Abscess is caused due to impaction of foreign body in […]