Faults in Radiographs can render them useless for their main purpose of helping in Diagnosis, these are called as non diagnostic radiographs as they do not provide any information or detail to get a diagnosis. A Radiograph to be useful for Diagnostic purpose should have proper dimensions replicating the size of the object being X-rayed, have proper contrast, sharpness, brightness, etc to be useful. We have already posted an article showing the Radiographic Faults caused due to Faulty Radiographic Techniques. Here we are going to share the various types of Faults in Radiographs caused due to Faulty Processing techniques.

Processing of a Radiograph is the term used to describe the steps which are done using chemicals to process or develop a film which has been exposed to X-rays. The chemical process done during processing is what brings out the image onto the film making it permanent, so any mistake during this process can lead to faults in the Radiographic image.

Types of Faulty Radiographs caused due to Faulty Processing Techniques:

Dark Image: The X-ray image is darker than normal making the image not distinguishable. There are multiple causes of a dark image like excessive development, higher development temperature, inaccurate timer and also higher concentration of the developing solution can lead to Dark Image of the X-ray.

Light Image: The image is lighter which can be due to multiple reasons such as less development time, low developer temperature, depleted or contaminated developing solution, inaccurate timer. It can result of less exposure time, mA and kVp.

Cracked or Reticulated Image: The Xray image has cracked appearance on its surface which is caused due to sudden temperature change between the developer and water bath.

White Spots: These are also called as fixer spots on the film which is caused due to droplets of fixing solution coming in contact with an exposed film before it is developed. 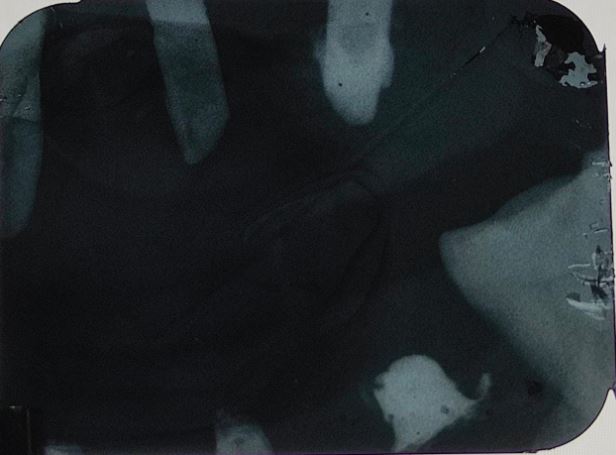 Dark Spots: These are also called as developer spots which are caused due to droplets of fixing solution coming in contact with an exposed film before it is developed.

White Area on Film: A portion of the film appears white when two films come in contact with each other during developing the film.

Dark Area on Film: A portion of the film appears dark when the overlap occurs in the fixer.

Blank Film: A total absence of the image on the film. This occurs when the entire emulsion is washed off before being developed. This is usually seen when the X-ray film is immersed in the fixer solution before developing the film. 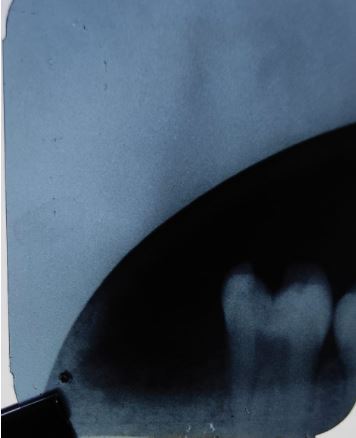 Straight White Border: A straight white border is seen when the film is not dipped completely in the developing solution. The portion of the Film which is not dipped in the Developer solution is underdeveloped resulting in a white border.

Straight Black Border: A straight black border is seen on one side of the film, this is caused due to insufficient fixer solution. The portion of the film which is not dipped in the fixer solution leads to black line.

White marks on Film: These are seen when there are air bubbles trapped on the film surface, this results in the processing solution to not come in contact with the film surface

Nail marks : These are crescent shaped artifacts caused due to rough handling of the film.

Tree like appearance or thin branching lines on film: These appearance is due to static electricity exposing the film  due to following reasons: opening the film packet too quickly, humid conditions, rubbing of the film with intensifying screen

Finger marks: Fingermarks on the film  result from handling the film with wet finger