You are here: Home / B.D.S / Glossary Of Periodontic Terms – F

FACE-BOW: A device used to record the positional relationship of the maxillary arch to the temporomandibular joints and to orient dental casts in this same relationship to the opening axis of an articulator.

FACET: A flattened or worn spot on the surface of a hard body, as on a bone or a tooth.

FACTITIOUS: I. Pertaining to a state or situation produced by other than natural means. 2. Self-inflicted.

FACULTATIVE: I. Voluntary; possessing the power to do or not to do a thing. 2. Capable of existing under different conditions, as a microorganism that can exist in either aerobic or anaerobic conditions.

FAMILI AL: Occurring in members of the same family, as in a familial disease. See: Congenital.

FENESTRATE: To pierce with one or more openings.

FENESTRATION: A window-like aperture or opening, such as may be found in the alveolar bone over the root of a tooth.

FESTOONS, GINGIVAL: The contours of the gingiva and oral mucosa over the roots of the teeth

that tend to follow the cervical lines. These are prominent in the presence of a thin alveolar process.

FIBER: A filament or thread. In periodontics the term usually refers to collagenous or elastic connective tissue fibers.

ALV EOGINGIVAL F.: Collagenous fibers that radiate from the bone of the alveolar crest into the lamina propria of the free and attached gingiva.

CIRCULAR F.: Collagenous fiber bundles within the gingiva that encircle the tooth in a ring-like fashion.

DENTOGINGIVAL F.: Numerous collagenous fibers that extend from cervical cementum to the lamina propria of the free and attached gingiva.

OXYTALAN F.: Fibers found in all connective tissue structures of the periodontium that appear to consist of thin, acid-resistant fibrils. Their function is unknown.

PRINCIPAL F.: The major fiber groups of the functioning periodontium:

ALV EOLAR CREST F.: Attaches to the cementum just apical to the cemento-enamel junction and run apically and laterally to insert into the surface of the alveolus.

APICAL F.: Radiates from the cementum around the apex of the root to the adjacent bone.

HORIZONTAL F.: Located just apical to the alveolar crest group, these fibers run perpendicular to the long axis of the root from cementum to bone.

INTERRADICULAR F.: Found between the roots of multirooted teeth, these fibers run from the cementum into the crestal bone of the interradicular septum.

OBLIQUE F.: The most numerous fiber group of the periodontal ligament; run from the cementum outwardly and coronally to insert into the bone.

TRANSSEPTAL F.: Collagenous fibers that run interdentally from the cementum just apical to the base of the junctional epithelium of one tooth over the alveolar crest to insert into a comparable region of an adjacent tooth.

FIBROBLAST: The predominant connective tissue cell; a flattened, irregularly-branched cell with a large oval nucleus that is responsible, in part, for the production and remodeling of the extracellular matrix.

FIBRONECTIN: High molecular weight (450 kDa) glycoproteins composed of two disulfide-linked polypeptides; functional domains of the molecule have affinity for cells and the extracellular matrix components; found on cell surfaces, in connective tissues, in the blood, and in other body fluids.

FIBROSIS: A fibrous change of the mucous membranes, especially the gingiva, as a result of chronic inflammation. Fibrotic gingiva may appear outwardly healthy, masking underlying disease.

FILLING, RE TROGRADE: An amalgam or other restoration placed in the apical portion of a tooth to seal the root canal following surgical removal of a periapical lesion and/or the end of the root.

FISSURE: A general term for a cleft or groove.

FISTULA: An abnormal canal joining the cavities of two hollow organs or the cavity of an organ and the surface of the body. See: Sinus Tract.

OROANTRAL F.: An abnormal opening between the maxillary sinus and the mouth.

OROFACIAL F.: An abnormal opening between the cutaneous surface of the face and mouth.

ORONASAL F.: An abnormal opening between the nasal cavity and the mouth.

FLAP: A loosened section of tissue separated from the surrounding tissues except at its base.

D OUBLE PAPIL L A PEDICLE F.: The use of the papillae on the mesial and distal of a tooth as laterally positioned flaps sutured together over the tooth root.

ENVELOPE F.: A flap retracted from a horizontal linear incision, as along the free gingival margin, with no vertical incision.

GINGIVAL F.: A flap that does not extend apical to the mucogingival junction.

MODIFIED WIDMAN F.: A scalloped, replaced, mucoperiosteal flap, accomplished with an internal bevel incision, that provides access to the root for root planing.

MUCOGINGIVAL F.: A flap that includes both gingiva and alveolar mucosa.

PARTIAL, THICKNESS (Split Thickness) F.: A surgical flap of mucosa and connective tissue that does not include the periosteum.

P OSITIONED F.: A surgical flap that is moved or advanced laterally, coronally, or apically to a new position.

REPLACED F.: A flap replaced in its original position.

SLIDING F.: A pedicle flap moved to a new position.

FLORA, ORAL: The microorganisms residing within the oral cavity.

FLOW CY TOMETRY: Measures the physical and chemical characteristics of individual cells as they move past optical or electronic sensors; can be used to detect and characterize specific cells in a mixed population; used to determine the effects of drugs, hormones, chemicals, etc., on cell proliferation, growth, and function.

FORAMEN: A natural opening or passage, particularly into or through a bone.

FOREIGN BODY: A non-native substance in the tissues or body cavities.

FOREIGN-BODY REACTION: A granulomatous reaction around a foreign material within a tissue or organ; often characterized by giant cells. This may present as acute or chronic gingival inflammation and may produce tattoos; or red, red/white; or suppurative lesions.

FORNIX: Any arch-shaped structure or vault-like space created by that structure, such as the vestibular fornix.

FREEWAY SPACE: The space between the maxillary and mandibular teeth when the mandible is suspended in the postural position.

FREMITUS: A palpable or visible movement of a tooth when subjected to occlusal forces.

FRENOTOMY: The cutting of a frenulum, especially the release of ankyloglossia.

FRENULECTOMY (Frenectomy): The excision of a frenulum.

FRENULUM: A small band or fold of integument or mucous membrane that checks, curbs, or limits the movements of an organ or part.

LABIAL F.: The fold of mucous membrane connecting the lip and the alveolar process in the midline of both the maxilla and mandible.

LINGUAL F.: The fold of mucous membrane connecting the tongue with the floor of the mouth and the mandibular alveolar process.

FRONTAL PLANE: Any plane passing longitudinally through the body from side to side at right angles to the median plane. It divides the body into front and back parts.

FUNCTIONAL SIDE: The side of the body towards which the mandible moves in lateral excursion.

FUNGI: A eucaryotic (nucleated) group of microbes. A phylum of plants whose members are devoid of any pigment capable of photosynthesis; they are unable to synthesize protein or other organic material from simple compounds, and are therefore parasitic or saprophtic. The three major pathologic mycoses or fungal infections involving subcutaneous orofacial sites are Sporotrichosis, Entomophthoromycosis, and Rhinosporidiosis. In immunocompromised individuals, Candida species are responsible for oralmycoses and may cause oral infections (thrush) in AIDS patients or other debilitated humans. Designated “opportunistic” pathogens since they are often found as members of the normal oral flora.

Most frequently implicated representative is C. albicans. Candidiasis attributable to C tropicalis, C. parapsilosis, C. pseudotropicalis, and stellatoidea have also been cultivated from the oral cavity.

FURCATION: The anatomic area of a multi rooted tooth where the roots diverge.

FUSIFORM: A descriptive term of bacterial cell morphology, referring to a spindle or cigar-shaped cell, such as is observed frequently for members of the genera Fusobacterium and Capnocytophaga.

FUSOSPIROCHETAL INFECTION: An infection characterized by a predominance of fusiforms and spirochetes. 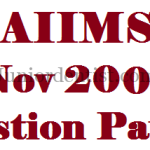 The Questions from AIIMS November 2009 MDS/Dental Entrance, All the Best for your entrance exams. Follow the question papers and do well in Entrances. As we have seen that previous questions are repeated a lot of times it is sensible to be up to date with the questions and practice them more than once. For […]

According to some scientists the use of dentures in patients is going be a thing of the past, replacing the artificial prosthesis are a group of cells which will be placed in the empty sockets where the teeth are missing and we can see growth of our own teeth within a span of few months […]

Pain is defined as “A more or less localized sensation of discomfort, distress or agony resulting from the stimulation of nerve endings” by Dorland’s medical dictionary. According to the Association for the study of Pain (IASP), Pain is defined as “an unpleasant sensory and emotional experience associated with actual or potential tissue damage, or described […]