Partially Edentulous Maxillary and Mandibular Arches were classified by Dr. Edward Keneddy back in 1925 along with other classifications such as Bailyn and Skinner Classifications, the most popular one is Keneddy’s Classification which helps in not just explaining the situation of the arch but also helps in principles of design for a RPD. There is a new classification called “Implant Corrected Kennedy Classification” which classifies the Edentulous space based on the need to be restored with an implant supported fixed partial denture which is not included in the classification.

This ICK classification can be used to communicate the placement of Implants before the treatment and also to communicate with the Lab or other dentists regarding the number and position of implants to be placed for Implant-assisted RPD’s. So this classification helps in Pre Surgical treatment planning and Post Prosthodontic planning.

The Edentulous space which needs to be restored with an implant-supported fixed partial denture is not included in the classification.

For depiction, the Maxillary Arch is drawn as a half circle facing up while the mandibular arch is drawn facing down as seen by the Doctor.

The Classification is termed as ICK for easy explanation 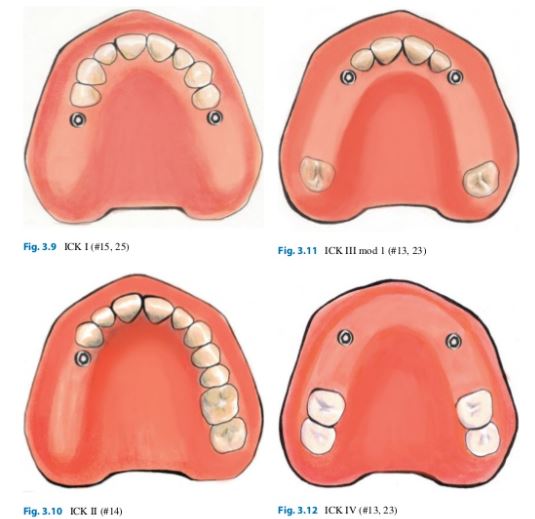 ICK I – for Kennedy Class I situations

The classifications are presented as follows – Max and Man are used to depict the arch, mod – depicts the number of modifications, the number of implants in the parentheses according to their position in the arch (FDI system) preceded by the number sign (#).

Example of Classification with modification – ICK I mod 2 (#16, 27) – This means “Kennedys Class I with two modifications and two implants placed in 16 and 27 tooth positions”