Papillae of Tongue are the tiny raised protrusions found on the surface of the tongue which house the taste buds which help in taste perception detecting taste elements such as salty, sour, sweet, bitter and umami. The papillae are of four types which differ in location and size of the papillae namely Fungiform papillae, Filiform papillae, Foliate Papillae and Circumvalate Papillae.

Taste buds work by receiving the food dissolved by saliva through small pores on top of the receptor cells sending the information detected by clusters of receptors and ion channels to the gustatory area of the brain through seventh, ninth and tenth cranial nerves. 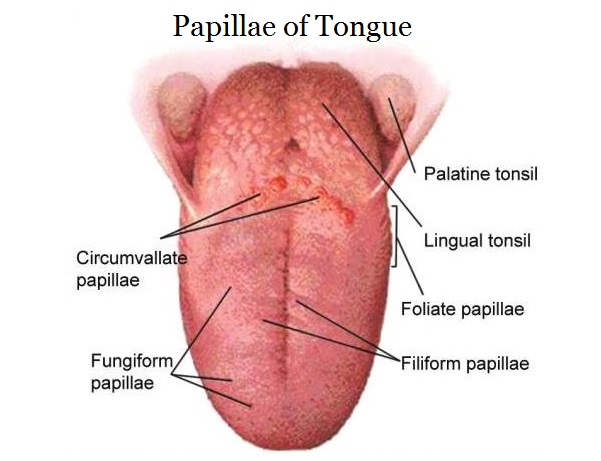 Let us look at each of the four types of papillae in detail explaining their location, shape and histology in detail.

These are the most numerous papillae seen on the surface of the tongue and are hair like or thread like in appearance projecting out from the dorsal surface of the tongue and are seen on the front two thirds of the tongue. Filiform papillae do not contain Taste Buds in them. Histologically these papillae have a cone shaped appearance which is lined by stratified squamous epithelium having thick keratin on the surface. The blood vessels are supported by the central core of the connective tissue. The epithelium contains secondary processes.

The papillae are arranged in rows parallel to the sulcus terminalis all over but at the tip of the tongue the rows become more traverse. These contain elastic fibers to make them more elastic compared to other types of papillae.

Coming to the Histology aspect the epithelium covering the fungiform papillae is thin non keratinized stratified squamous epithelium giving the reddish color to the papillae. The supporting connective tissue shows collagen fibers, fibroblasts and blood vessels. The fungiform papillae are innervated by the seventh cranial nerve via the sub-mandibular ganglion, chorda tympani and geniculate ganglion ascending to the solitary nucleus in the brain stem.

These are also called as Vallate papillae which are dome shaped structures located anterior to the foramen cecum and sulcus terminalis. The papillae form a row on either side, two rows run backwards and medially meeting in the midline. The papillae has the shape of a truncated cone with the smaller end being directed downward and attached to the tongue, the broader part or base projecting a little above the surface of the tongue has numerous secondary papillae.

The papillae are 10 to 12 in number and are the least in number but the largest in size compared to the other three types of papillae found, these papillae contain around 250 taste buds. The papillae are separated from the surface of the tongue with a ‘V’ shaped sulcus located around the papillae. Coming to the Histology, it is lined by keratinized stratified squamous epithelium at the superficial surface and non-keratinized epithelium on the lateral surface, taste buds are seen on this lateral surface. The central portion of the papillae has connective tissue. The papillae not just contain taste buds but also come with serous minor salivary glands or von Ebner’s glands located beneath the connective tissue. The main purpose of the salivary glands is to flush out food debris from the ‘V’ shaped trough around the papillae.

These papillae are located just in front of the V of vallate papillae, they are clustered into two groups on each side of the tongue. These contain taste buds and they get their name because of the shape which is an elongated fold that looks like a leaf seen from edge-on.