You are here: Home / General Medicine / Oral Signs and Symptoms of Anemia due to Iron Deficiency

Anemia caused due to Iron Deficiency which is caused due to blood loss has many Oral signs and symptoms and it is important to a dentist to identify these and act accordingly. Iron deficiency Anemia is the most common type of anemia which affects approximately 30% of the world’s population. It can be due to many reasons and it has to be identified to help cure the disease. It can be due to blood loss, mal absorption gastrectomy and even with people having habit of eating clay.

Apart from the Systemic Signs and Symptoms the Oral symptoms re also important to identify Iron deficiency anemia and also for Dentists it is important to understand the symptoms to diagnose the cause and go ahead with the required treatment. 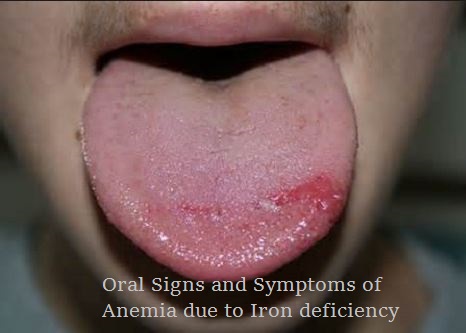 Signs and symptoms to look out for in Iron Deficiency Anemia:

Histologic Signs and Symptoms of Tongue in Anemic patients:

In Anemia the clotting ability of Blood decreases because of the low oxygen tension affecting the rheological interactions between the cellular components of blood which are mainly platelets and endothelium thus affecting the clotting process.

From Dental point of view only the symptoms can be controlled like using antiseptic gels for the ulcers and mouth washes but for the signs and symptoms to completely subside the cause of the Iron deficiency should be fixed by taking help of a physician.

Dental Clinic can be a very intimidating place for a patient who is apprehensive or visiting the dentist for the first time or experienced a previous bad dental visit. It is very common for the patients to be having Fear and Anxiety during a dental visit. As a Dentist, we have to make sure the […]