Ankylosis in general means immobility of a joint due to any reason, TMJ ankylosis is immobility of the Mandible due to reasons such as trauma, infection, disease, failed surgery, Rheumatoid arthritis and most common being congenital. Temporomandibular Joint is a complex structure that helps in the movement of the mandible with the help of Ligaments and muscles and any deformity in it can directly affect the growth of the mandible and also occlusion.

I. Classification of Kazanjian 1938: 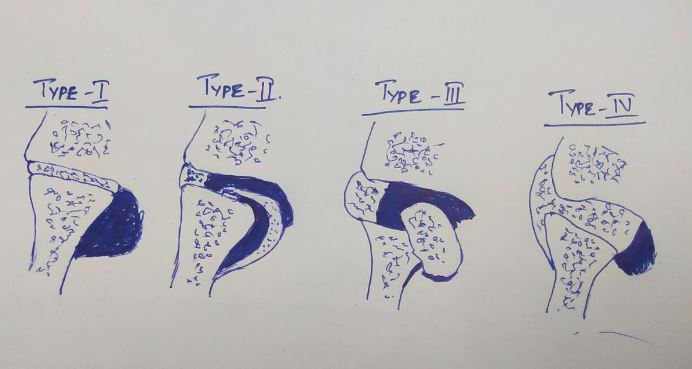 Etiology of Cause of TMJ Ankylosis:

The classifications have mentioned almost all the causes of TMJ ankylosis which are divided into True and False types based on the formation of fibrous, fibro-osseous and osseous causes. Let us discuss the major causes of TMJ Ankylosis in detail.

Inflammation: Inflammatory Arthritis (Rheumatoid) leads to ankylosis in less than 7% of the cases. The causes of Inflammation of the TMJ joint include Stills disease or juvenile rheumatoid arthritis, Marie-Strumpell disease (ankylosis spondylitis), psoriatic arthritis, fibrodysplasia ossificans progressiva, and osteoarthritis.

Following Arthroplasty:  TMJ Ankylosis is seen in patients following Mandibular orthognathic procedures or TMJ arthroplasty. Following disc repair there can be adhesion between the disc and articular eminence. In case of lack of physiotherapy postoperatively can lead to bony ankylosis after discectomy procedure.

Neoplasia: Due to any tumor of the condyle or metastatic lesion or chondromastosis of the TMJ leading to TMJ Ankylosis.

Congenital: Bony fusion of the maxilla and mandible can be seen in rare conditions.

There are certain clinical and radiological features that help in diagnosing TMJ Ankylosis with the main feature being restricted mouth opening which depends on whether the Ankylosis is Unilateral or Bilateral.

Mouth Opening and Mandibular movement: It differs based on the type of Ankylosis – Fibrous Ankylosis there will be reduced jaw motion which is less than 15mm, Deviation of the mandible is seen in Unilateral ankylosis towards the side of ankylosis.

Mandibular deficiency: When there is ankylosis from an early age there will be reduced growth of mandible due to reduced ramal height, micrognathia, birds face appearance is seen in bilateral ankylosis. Antegonial notch is prominent due to the pull of the muscles attached to the mandible. The facial deformity is due to reduced epiphyseal growth as a result of the absence of stimulation from the functional matrix.

Facial Asymmetry: The chin is deviated towards the ankylosed side along with micrognathia in case of unilateral ankylosis There is a deficiency of body of mandible on the normal side. Along with asymmetry, there will be malocclusion, caries, halitosis and hypertrophic suprahyoid musculature.

A Panoramic radiograph is required for initial screening

CT of TMJ is useful in identifying spicules of bone which bridge the joint space and cannot be identified in other diagnostic approaches. This gives the best detail regarding the medical extension of the ankylotic mass. The posterior and medial aspects can be viewed with the CT effectively.

There are many factors to be considered for the Treatment plan in TMJ ankylosis like age, unilateral or bilateral, fibrous or bony type, the extent of it, patient requirements (Functional or aesthetic).

Treatment in Children below 5 Years of Age: These children are more susceptible to deformities and surgical consideration should be done to improve the mandibular function and also to achieve normal growth and development. As there is growth the ankylosed joint needs to be removed and reconstructed with a graft that is capable of active growth along with other surrounding structures. A Rib or Costochondral graft has intrinsic growth potential, the natural contour of the rib matches the condylar anatomy.

In adult’s, removal of the Ankylosed portion, both bony and fibrous parts and reconstruction of the joint to facilitate movement is necessary as there is no growth.

Management of TMJ Ankylosis by Kaban:

Temporalis muscle flap is most commonly used with Al Kayat-Bramley incision. It has a temporalis extension allowing elevation of a temporalis fascia flap for interposition. Other incisions are periauricular and submandibular incisions (Extraoral) through which the joint is accessed after exposing the temporalis fascia, the zygomatic arch is reached. The periosteum is incised over the arch by giving an incision over the lateral capsule. After reaching the arch – Gap Arthroplasty or Interpositional arthroplasty is done. The various interpositional materials are Autogenous tissue grafts – Muscles (temporalis), Skin, Fat, Fascia lata, dermis, cartilage.