Triple Antibiotic Paste is a type of Intra Canal Medicament which is used in Endodontic Treatment or Root canal Treatment to kill the micro organisms in the periapical region of an infected Root Canal. Triple antibiotic Paste or (TAP) consists of three medicines – Metronidazole, Ciprofloxacin and Minocycline. This combination of medicines have been found to be the best regimen to eliminate root canal pathogens.

It is used as an Intracanal Medicament and in Regenerative Endodontics (Pulp Capping). It has been found to be very effective against E Feacalis which is a very stubborn bacteria found in Re-infected root canals.

TAP is a combination of three antibiotics – Minocycline + Ciprofloxacin + Metronidazole. 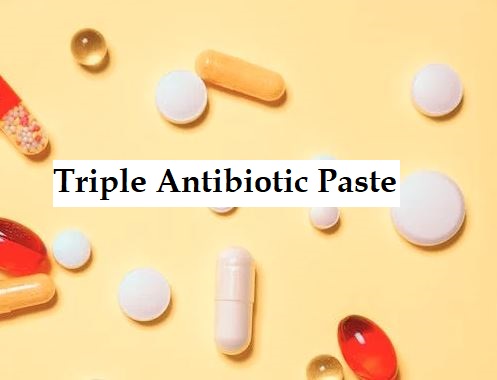 How is Triple Antibiotics Paste prepared:

Hoshino et al. first proposed the combination of TPA and mentioned that the three Antibiotics –

should be mixed in a ratio of 1:1:1. These three components should have a carrier Glycol and macrogol ointment in a ratio of 1:1. The combination was later modified by making changes in the Ratios by Takushige et al. who proposed that the ratios should be Metronidazole + Minocycline + Ciprofloxacin – 3:3:1.

A new Intra Canal Medicament known as MTAD was found to be useful in eliminating Enterococcus Faecalis strains  in a study published by Newberry et al. The MTAD is a combination of 3% Doxycycline, Citric Acid and a detergent polysorbate 80. MTAD should be used as an irrigation fluid inside the canals. MTAD should be used as the final irrigation rinse after using 1.3% Naocl and Saline. This has been found to remove the smear layer without altering the structure of dentinal tubules.