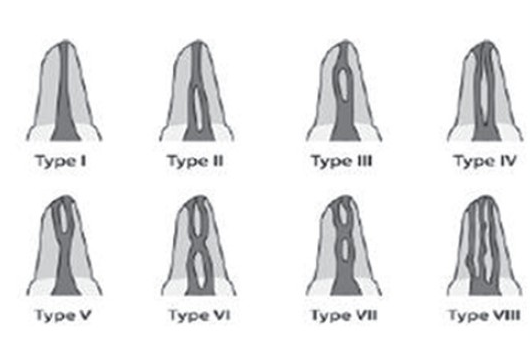 Type I: Single Canal is present in the Pulp chamber from Crown to apex

Type II: The Pulp separates in two near the crown and joins at the Apex to form one root canal.

Type III: Starts as One Root Canal in the Pupal chamber and divided into two as it nears the apical foramen and then fuses again to form a single root near the Apical foramen.

Type IV: The Root separates into two distinct canals and extends till the Root Apex separately

Type V: The Root canal is single is a single entity extending till the Apex of the Root but dividing into two separate canals right before the Apical foramen.

Type VI: Root Canals Start as two canals from the pulp chamber and join at the middle of the Root to form one and extend till the Apex and again divide into two canals just short of the Apical foramen.

Type VII: The Pulp Chamber near the Coronal Portion divides into three separate Root canals extending till the Apex of the Root.

The problem with Vertucci’s Classification is that he did not consider the position of Auxiliary canals extending out of the Pulp chamber which is an important factor to consider if you want to do complete and proper Root Canal Therapy.

Another important factor which Vertucci failed to consider and include in his classification is the location from where the Apical foramen in present and from where the pulp chamber exits the Root canal. This is also an important factor because the position of the Apical foramen helps us in deciding the exact Working length and also to prevent us from forming a ledge or creating perforation.