Ferrule Effect is defined as “a 360-degree metal collar of the crown surrounding the parallel walls of the dentine extending coronally to the shoulder of the preparation” by Sorensen & Engelman. As much as coronal tooth as possible should be preserved, and an abut-joint margin between the core and tooth be used, i.e. minimal taper. The word Ferrule has originated from the Latin words Iron (Ferrum) + bracelets (Viriola) = Ferrule (Brown 1993).

According to Pathways of Pulp, the Ferrule Effect is defined as ” A ferrule, in respect to teeth, is a band that excircles the external dimension of residual tooth structure. A 2mm height of tooth structure should be available to allow for a ferrule effect. A Ferrule is a very important aspect in deciding the success or failure of an artificial crown as it forms the border or the junction between the crown end and the tooth. Earlier a dowel was though to strengthen the remaining tooth structure and was referred to as Intracoronal Crutch by Rosen but this has been rejected now. 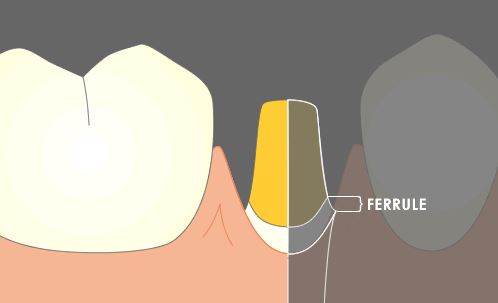 What are the Advantages of having a Dental Ferrule?

What is the Role or Use of Dental Ferrule?

It is a must in post Endodontic reconstruction of severely degraded teeth to give an embracement of the hard tissue by crown restoration of a certain height. The Ferrule comprises of a shoulder preparation with parallel coronal dentin walls. In case of tooth where a ferrule is difficult to be given, Crown Lengthening is used to expose the root surface of the tooth to give a proper ferrule achieving a minimum of 2mm.

The hugging effect between the artificial crown and the tooth helps in improving Resistance of the restoration. A Ferrule should have a height of 1.5 to 2 mm to give fracture resistance to endodontically treated teeth.  It is important to save maximum coronal tooth and a butt-joint margin between the core and tooth should be used to achieve minimal taper.

What is Ferrule Effect?

Ferrule effect can be caused due to ferrule resisting stresses like functional lever forces, wedging effect of tapered posts and lateral forces exerted during the post insertion. 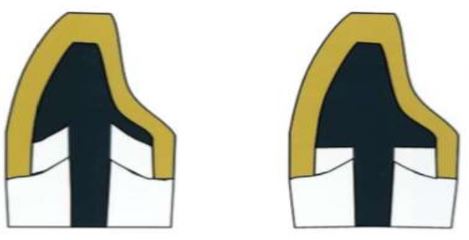 What are the various types of Dental Ferrules? 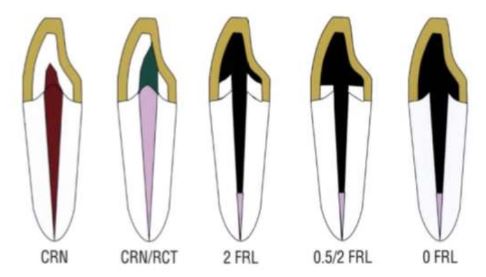 Classification of Ferrules into Categories is based on the risk factor –

The type and extent of lateral load differs with the type of tooth being restored like the Anterior teeth are loaded non-axially, posterior teeth are loaded occluso-gingivally, anterior teeth with deep overbite and parafunction are at a higher risk of failure and teeth that are in group function with long maxillary buccal cusps produce higher lateral forces than if there was canine guidance.