Bodily Movement: This is the most desirable type of tooth movement in Orthodontic treatment. Both the crown and root move in the same direction either labially or lingually the same amount of distance.

Tipping Movement: It is the simplest form of Tooth Movement where greater movement of the crown is seen compared to that of Root. Tipping tooth movement is of two types – Controlled Tipping and Uncontrolled Tipping

Intrusion: It is defined as the axial movement of the tooth along the long axis towards the apex of the root. It is the type of tooth movement which requires least amount of force.

Extrusion: It is the Axial movement of tooth along the long axis towards the Coronal part of Tooth. 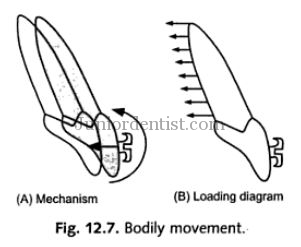 Torquing: It is the labio-lingual movement of root compared to the Tooth.

Uprighting: It the type of tooth movement which is used to correct either mesially or distally tilted tooth.

Rotation: It is the defined as the spinning of tooth along its own long axis which can be achieved by applying a couple of forces together where one force gets nullified and only one movement exists which causes rotation.