Pituitary Gland: It is also called as Hypohysis. It is located in a saddle-shaped space in the Sphenoid Bone called the Sella Tursica which is located in the base of the brain in the frontal lobe.

Hypothalamus is a tiny part of the brain which is attached to the pituitary gland by means of the infundibular (hypophyseal) stalk. Hypothalamus is considered as the “Master controller” or “Master gland” as its main function is:

Pituitary Gland is one of the major and most important organs in the human body, although small in size (Size of a Pea) it is very important in function as the hormones produced from the gland travel throughout the body and are either responsible for the function of certain organs like (TSH helps in producing Thyroid gland to produce T3, T4 etc) or helps in stimulation certain functions in the body.

Pituitary Gland is divided into 2 parts:

Hormones secreted by the Middle lobe of Pituitary:

Hormones Secreted by the Posterior Pituitary: 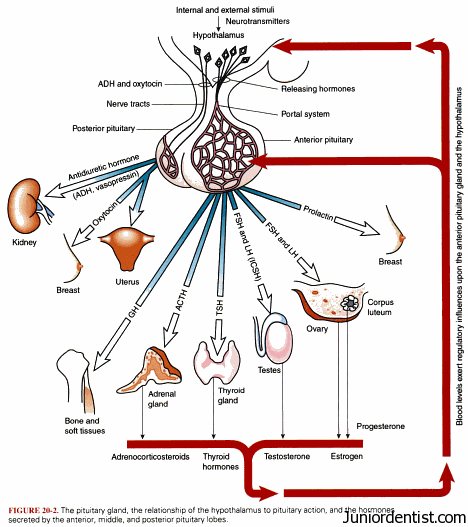 Hormones Secreted by Pituitary Glands and their Functions:

1. Thyroid stimulating hormone (TSH) or Thyrotropin: This hormone which is secreted by the anterior lobe of the pituitary.

3. Prolactin (PRL): It is secreted by Anterior lobe of Pituitary.

4. Adenocorticotrophic Hormone (ACTH) or Corticotropin: It is secreted by the Anterior Lobe of Pituitary.

5. Follicle Stimulating Hormone (FSH): FSH stimulates the growth and secretion of Ovarian Follicles in women and the production of Sperm in men.

6. Luteinizing Hormone: Stimulates Ovulation and formulation of the Corpus luteum in females. In males, LH is called (Interstitial cell stimulating hormone -ICSH) which influences the secretion of testosterone and other sex hormones from the specialized area in the testes.

7. Anti Diuretic Hormone or Argenine Vasopressin: It is a hormone secreted by the Posterior Pituitary.

8. Melanocyte Stimulating Hormone or Intermedins: It is secreted by the Middle Lobe of Pituitary.

9. Oxytocin: It is a hormone secreted by Posterior Pituitary.

Hormones which stimulate the Pituitary Gland to Secrete its 6 hormones:

Thyrotropin Releasing Hormone: This hormone which is released from the Hypothalamus Stimulates the anterior lobe of pituitary gland to secrete the Thyroid Stimulating hormone.

Growth Hormone Releasing Hormone (GRH or GHRH): It is the hormone secreted by the hypothalamus which stimulates the release of Growth Hormone from the Anterior pituitary.

Prolactin Releasing Hormone (PRH): It is secreted by Hypothalamus which stimulates the secretion of Prolactin from the anterior Pituitary gland.